The ratified and validated standings for the 2016 series Champions has been released. Ladies and Gentlemen – I present – our champions!

The below results show the events, and the VCM and second sign riders who have represented us (in bold) and achieved.

The certificates and awards will be going out to this years happy recipients either at the RCC ride and dinner, or the VCM Annual Awards and party respectfully.

“The VC Melyd awards will be presented at the VC Melyd Annual dinner on Friday 25th November at the Faenol Fawr, Bodelwyddan at 9.30 pm.

The Rhyl CC awards will be presented at the Rhyl CC Christmas dinner on Sunday December 11th at the White Horse PH, Llangynhafal.“

Trophies will be awarded to age group winners who competed in 6 or more events.“

Source: The official results can be found on the Rhyl CC website here.

Gaps and lack of awards: This is because no one from that age group took part. So – a word to the wise, check the season next year – lets have a VCM rider in more of these slots for next year!

How are these decided? During the season there are a number of Club Champion events which decide on these esteemed titles for the year.

What about the points I have seen on the time sheets? Points are awarded per event for the first X places. Placing highly gives you an obvious advantage unsurprisingly… as does completing more events. A complete break down can be found below for every one of the SIXTY ONE entrants from local clubs (of which 28 where VCM) in this years season.

Congratulations to everyone who turned up for the 25 mile ride today. The heavy heavy rain of earlier in the afternoon and the light rain at the start saw a very limited turn out with many thinking it would (or hoping!) it would be cancelled.

Congratulations to Sally for setting yet another course record.

Who would have thought one small fee and some markings on a piece of a paper could bring such joy? Yes – for a few moments of your time and some of your hard earned cash – you too can renew your membership of VC Melyd: Gallt Melyd’s premier cycling club, North Wales – or indeed join. 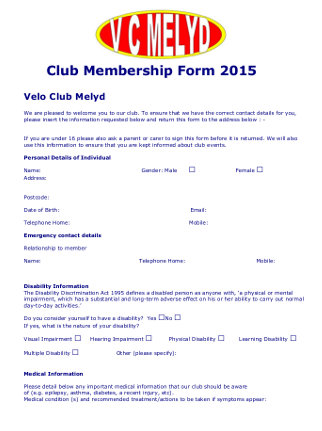 Hand fettled and honed over the years – subtle changes to the form for 2015 render this by far the most exciting version, and lab tested to provide a 15% aerodynamic advantage over previous versions. Its going to be a good year – make sure you are signed up.

What does it provide: Regretfully the blazer badge and tie are no longer offered as part of membership – however it does cover you to take part in club organised events and time trials, and means any points gained in events are counted towards end of year awards – this alongside the warm feeling of belonging that we all secretly clamour for, banter, and some really top like minded people of a consistently surprisingly and wide range athletic ability.

In an idea world membership forms and subscriptions to the Club Secretary prior to the start of February 2015… but its never too late.

Whatever your preference – speed, stealth, social, mud, weekend regular, or track – make that change. You know it makes sense.